TJSL Presence is Extensive in July Issue of 'SD Lawyer' 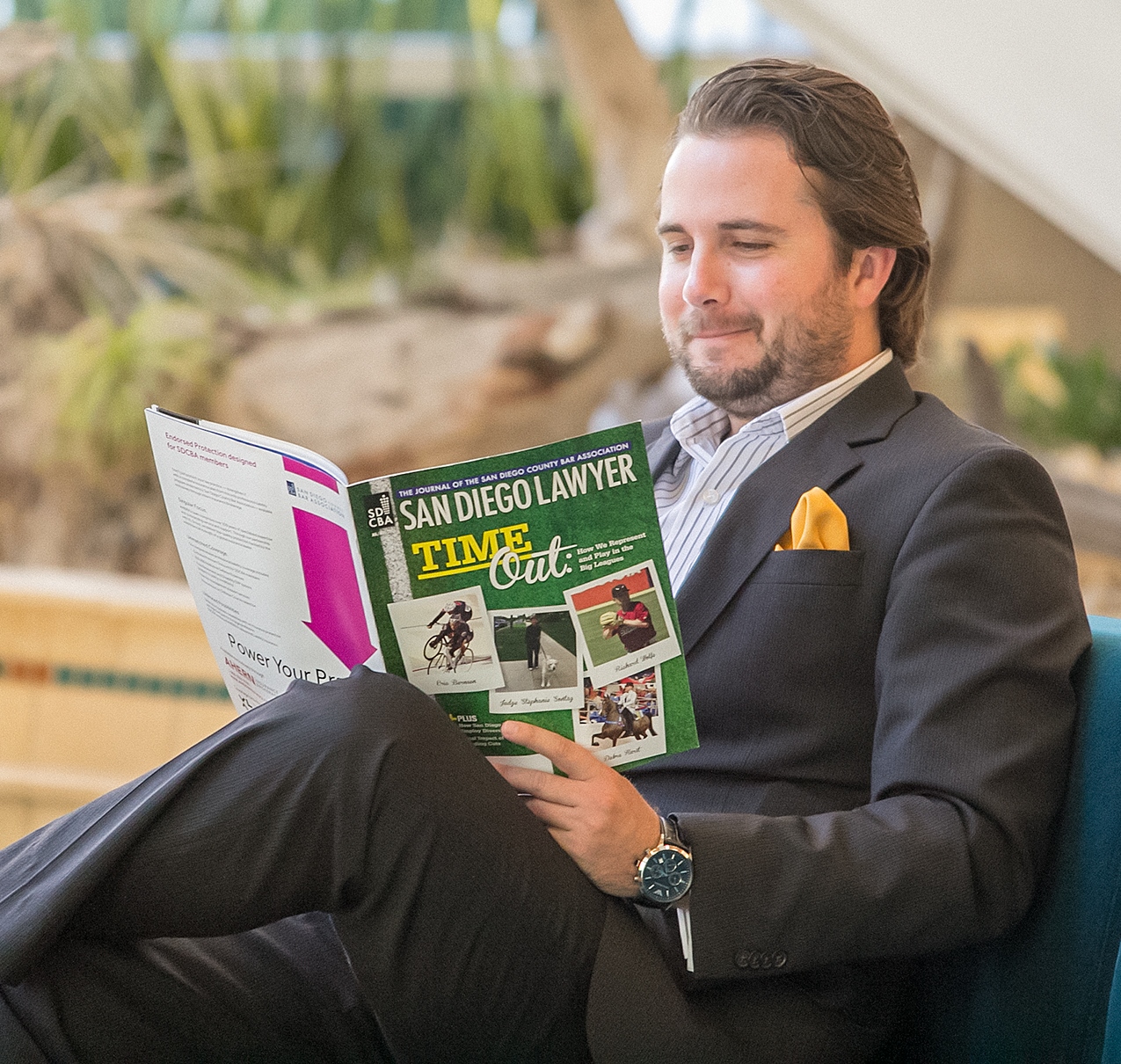 The pages of the July/August issue of San Diego Lawyer -The Journal of the San Diego County Bar Association (SDCBA), are teeming with articles authored or co-authored by members of the TJSL community, including two informative feature articles about innovative TJSL programs.

Alumnus Jeremy Evans ’11, who is on the editorial staff of the Journal, has the cover story, titled “Time OUT – How We Represent and Play in the Big Leagues.” The article briefly profiles how some San Diego attorneys are involved with sports representation, including Randy Grossman ’94, who represents well known sports figures like Hall of Famer Dave Winfield. The article also describes how some local attorneys participate in sports, including Eric Bernsen ’12, who competes in long-distance bicycling, and Diane Letarte ‘96, who loves to ride motorcycles. (TJSL Trivia – Did you know that the law school once had an ice hockey team on which former California State Bar President Marc Adelman ’77 and San Diego Lawyer Editor Martin Kruming ’77 both played?)

Evans also produced a feature for this issue that asks some local practitioners “How did you choose the type of law you practice?” On that same page is a small item and photo about TJSL Graduate Programs Director Jason Fiske ’08 on a recent visit to Azerbaijan.

TJSL Professor Steve Semeraro, winner of the ABA Legal Fiction Writing Contest published in the Journal of Legal Education in 2012, accepted the interesting challenge of authoring part of a yet-to-be-written novel. He was given an opening sentence and then proceeded to write the next 300 words or so of the story, titled “A Smile Said He Should Have Listened.” San Diego Lawyer invites readers to write and email the next 300 words by August 1.

Alumna Elisabeth Donovan ’12 has two articles in this issue, the first being a profile of TJSL’s new Center for Solo Practitioners, with quotes from TJSL Professors Semeraro and Luz Herrera, and a nod to Center director, Professor Lilys McCoy. Donovan’s second article focuses on the relationships the SDCBA and TJSL have developed with the Sao Paulo Bar Association and, in particular, TJSL’s LEEP program for Brazilian attorneys, directed by Carla McEwen. Both McEwen and William Byrnes, Associate Dean for TJSL’s Graduate & Distance Education Programs are mentioned in the article.

The “Photo Gallery” section of the Journal features the smiling faces of former Dean Rudy Hasl, alumna Renee Galente ’08 and Nory Pascua ’98, who were honored at a special luncheon during Law Week as 2013 SDCBA Service Award winners.

TJSL’s new Dean, Thomas Guernsey, will be a contributor to the regularly appearing “Deans” column in San Diego Lawyer in the coming months. Dean Guernsey’s first column as Dean of the Thomas Jefferson School of Law will appear in the September issue, focusing on access to justice and how law schools and the local bar associations should team together on incubator programs, like TJSL’s new Center for Solo Practitioners, to produce lawyers who will serve the underrepresented.

Third-year student Samantha Morales, who has contributed many stories to the TJSL website and The Advisor weekly newsletter as a work study assistant in the Communications Office, will be a Law Student Editor for San Diego Lawyer during the 2013-14 academic year, working with TJSL alumnus Martin Kruming ’77, who is editor of the Journal. Morales will carry on the tradition of Wendy Dimpfl ‘09 and Elisabeth Donovan, former Communications Office assistants – and good writers/reporters - who also went on to serve as Law Student Editors for the Journal.