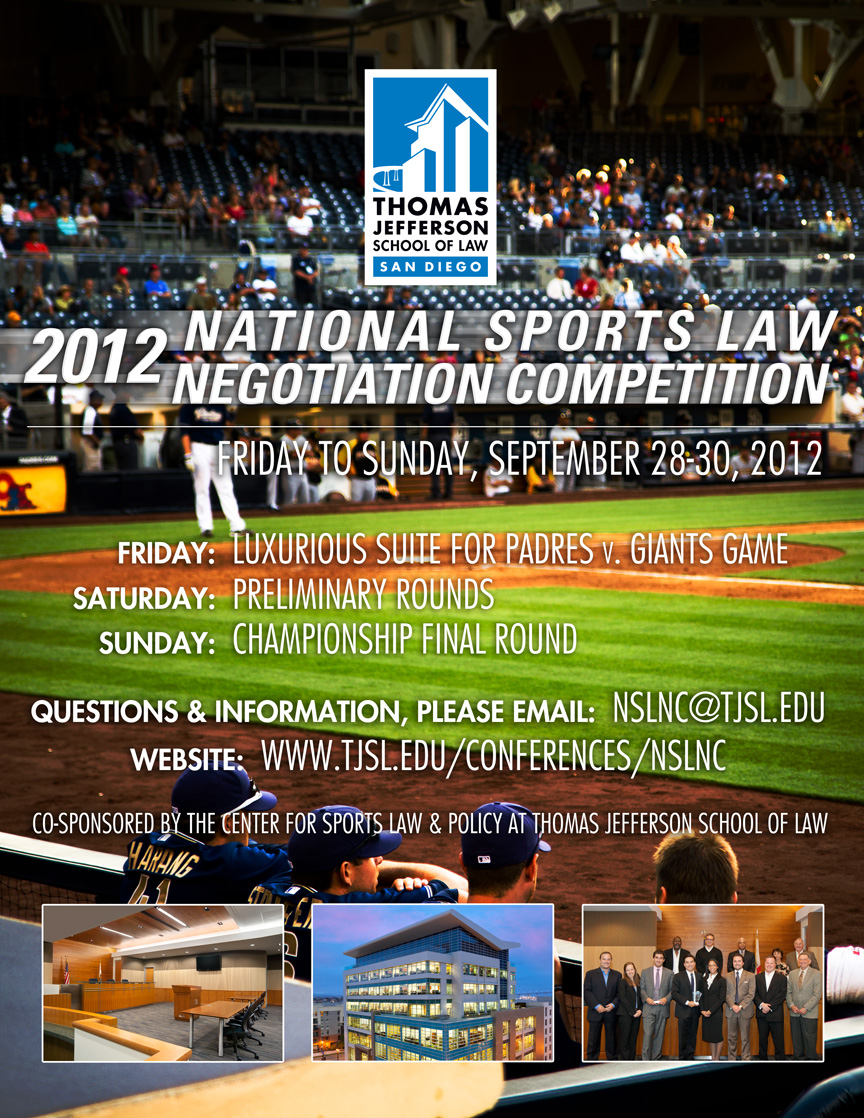 Excitement is building for the 2012 National Sports Law Negotiation Competition and Sports Law Symposium that will be held at Thomas Jefferson School of Law the weekend of September 28 – 30. This marks the second year of this prestigious competition that features teams from top law schools across the nation.

The success and rapidly spreading reputation of the inaugural competition in 2011 has resulted in twice the number of participating teams for 2012. This year, 80 students will comprise 40 teams representing 28 different law schools, including Harvard, Notre Dame and UC-Berkeley. They will compete by negotiating real sports law issues in an academic setting.

The keynote speaker for this year’s event is sports super-agent Leigh Steinberg, who is often credited as the inspiration for the 1996 hit movie “Jerry Maguire.” During his 30-year career, Steinberg has represented more than 150 professional athletes, including Steve Young, Troy Aikman and Oscar de la Hoya.

“NSLNC is going to be a great set of events this year because we have expanded on what the teams and public enjoyed last year while fine-tuning the entire competition,” said Jeremy Evans ’11, NSLNC’s Board Director who also is the event’s founder. “Leigh Steinberg is a legend in the sports industry and having him and 28 law school teams from across the country here in San Diego is truly a pleasure and an honor. We look forward to taking the competition to an even higher plateau.”

The competition and symposium weekend will include taking in a San Diego Padres game from the private suites at Petco Park on Friday night to allow the law students and special guests some time for networking and mingling.

On Saturday, September 28, the competition officially kicks off and will challenge the participating teams with recent issues in sports law and negotiations. Saturday night’s program includes meeting the competition’s judges, including volunteers from San Diego’s legal community, and the keynote address by Leigh Steinberg. The NSLNC Board also will announce the finalist teams. Later Saturday night, there will be a complimentary mixer in the famous Gaslamp District of downtown San Diego for all guests and participating law students.

Sunday’s program will include the championship final round of the competition and TJSL’s 11th Annual Sports Law Symposium, featuring sports agents, professionals and others who will discuss hot legal topics in the sports world. Teams and guests will have time later on Sunday afternoon to explore “America’s Finest City.” The public is invited to attend the symposium. Tickets are $55 for the general public and can be purchased through the NSLNC website at http://www.tjsl.edu/conferences/nslnc . Discounted tickets are available for members of the San Diego County Bar Association and the TJSL community.

“The competition has grown in just two years to become the premiere and only Sports Law Negotiation Competition in the world,” says Jeremy Evans. “We look forward to further growth and giving back to the law students and sports community, providing trained and well-equipped lawyers and agents to better manage clients, employers, athletes, ball clubs, etc.”

The competition is co-sponsored by TJSL’s new Center for Sports Law and Policy, directed by Distinguished Professor Rodney Smith, the co-author of a widely used sports law casebook, a former member of the N.C.A.A. Division I Athletics Certification Steering Committee and a frequent commentator on sports law issues.

Previous: Marc Adelman '77 presents "Getting in, Getting out, and Getting paid, without Getting Sued: A CLE presentation on ethics."

Next: "Why attending the TJSL Study Abroad Programs are a must while in Law School!"