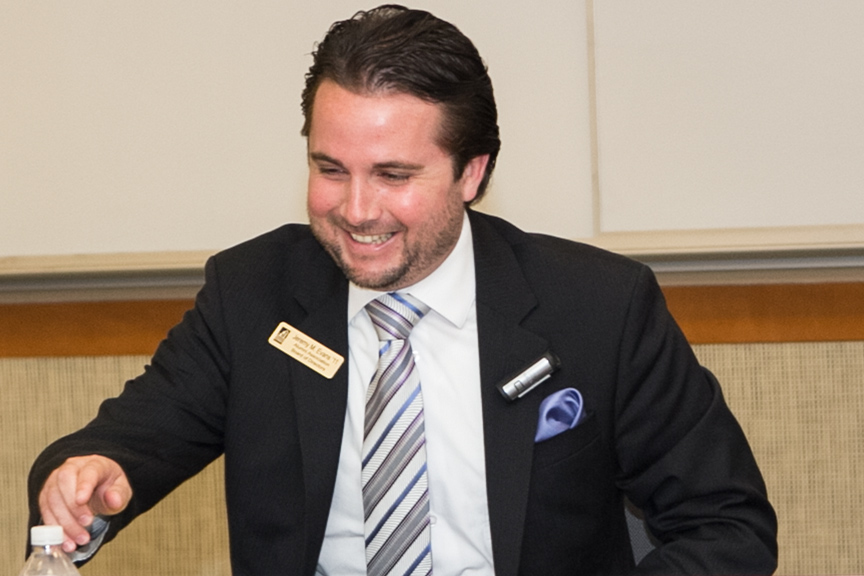 Networking is one of the most important tools of the trade when it comes to getting established in the legal profession. But as those students who attended the TJSL Alumni Associations Networking Dos and Don’ts event at the law school on March 14 learned – networking is both an art and a science.

The three panelists were TJSL alumni who each networked successfully to launch their own careers: Lacy J Lodes ’08; Eric Ganci ’08 and Jeremy Evans ’11. The emcee was Alumni Association President Renee Galente ’08.

The consensus was: Don’t just walk up to someone at a networking event, stick a resume or business card in their hand and ask for a job. It won’t work. In fact, Eric Ganci thinks that’s one of the biggest “don’ts.”

“Networking makes genuine connections,” said Lacy J Lodes. “It won’t necessarily get you a job, but it does allow you to plant the seeds. To get a job, you need to be around the people you want to work with and look up to. Instead of asking for a job, ask for advice on getting a job.”

“Network early and often,” said Eric Ganci. “What Lacy J said is the goldmine. Get involved with legal organizations outside of law school. It gives you more contacts when you get into practice. Also, meet lawyers in the fields you’re interested in. Take them out to coffee. Learn what their typical day is like.”

“Where your heart is is where you’ll find your treasure,” said Jeremy Evans, speaking of the importance of knowing exactly what you want to do with your JD degree. He added that, “Professionalism starts the first day of law school.”

The panelists also said it’s not just getting to know others, but letting them get to know you. At networking events it’s quality, not quantity. You can’t get to know everyone at a networking gathering, but you can get to know several people by having good conversations with you that they will remember.

One good piece of advice they offered: “try to get information, not a job.” Another piece of advice: “Always have business cards with you.” And Lodes is a big believer in thank yous. “I got a job offer from an interviewer who didn’t treat me very well. But I had sent her a thank you card, and she said that’s why she hired me.”

These lawyers also had great networking advice for the students, including attorney Anna Romanskaya ’07 of Lawyers Club, who said the most important thing she sees in law students is “follow through.”

“You need to learn how to sell yourself,” said attorney Rafael Acosta of the North County Bar Association. He added that people you network need to know who you are, where you’re coming from and what you want to do. “Nobody cares about how much you know until they know how much you care,” he said.

One way of doing that, according to the lawyers, is to “interview for information, not for a job.”

"You should know what fields you are interested in and determine what you want to do with your law degree," said attorney Alara Chilton of San Diego La Raza Lawyers. "Take a look in the mirror and ask yourself, what do I really want to do. That will make your networking more effective because now you know the direction you want to take.”

The students who attended said they got a lot out of the event.

“It was wonderful,” said Jessica McCracken 1L.” This is exactly what I need to hear. I’m excited to start showing up at events.”

“This event was awesome,” said Neda Shoustari 3L. “It has definitely given me insight that attorneys are approachable. They are normal people.”

“This cleared up some misconceptions I had about networking,” said Danny Radford 1L.

That’s exactly what the alumni who organized the event were hoping for.

Next: "Criminal Law Basics: From Arrest to Sentencing," by Jeremy M. Evans, NLD Board Member