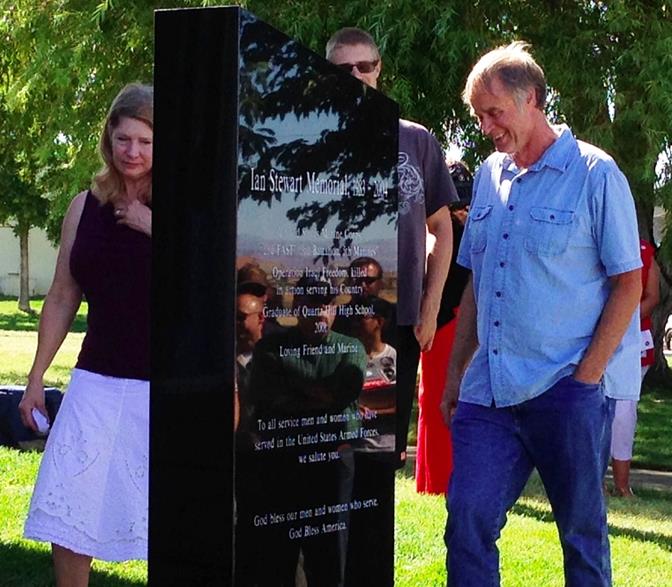 Cpl. Stewart’s father, Dana, remarked how important the memorial is to helping not only the family, but the community at large, to remember his son.

“To the people who have come together to honor our son, we can’t say thank you enough,” he said, holding back tears while searching for the right words. “It’s hard to sometimes think how long it’s been … It’s hard not to imagine ‘what if’ …”

He then thanked Jeremy M. Evans, chairman of the Ian Stewart Memorial Committee, and all the members and volunteers who “had put in the time and worked so hard” to help build the memorial to his son.

The memorial was three years in the making, according to Evans, and was made possible through the Ian Stewart Memorial Committee, Antelope Valley Detachment No. 930 of the Marine Corps League, and many donors and sponsors throughout the community.

At the Thursday’s ceremony, Palmdale City Councilman Frederick Thompson presented a certificate of commendation from the city of Palmdale that honored Cpl. Stewart for his service and dedication.

Reading the commendation, Thompson characterized Stewart as a “great and well-respected American hero, and an honorable corporal, who will always be honored by his family, friends and community.”

Jackie Owens, a district representative for Congressman Howard P. “Buck” McKeon (R-CA), also attended the dedication, presenting members of the Ian Stewart Memorial Committee and others with a Certificate of Special Congressional Recognition for outstanding service to the Antelope Valley.

“I send a special heartfelt message of love and gratitude to the family, and as chairman of the House Armed Services Committee, Congressman McKeon is ever so grateful to you, to Cpl. Stewart, and to the community of the Antelope Valley,” Owens said, while also noting that “Cpl. Stewart was a noble man, and he served in a noble capacity, and today is about remembering that.”

Corporal Stewart was assigned to the 3rd Battalion, 5th Marine Regiment, 1st Marine Division, I Marine Expeditionary Force at Camp Pendleton, CA. He was killed on Dec. 12, 2004, by enemy action in Anbar Province, Iraq during Operation Iraqi Freedom. Stewart was a 2001 graduate of Quartz Hill High School and served in the Marine Corps with fellow Quartz Hill High School graduates Andy Strangio and Wyatt Waldron. Stewart is survived by his parents, Dawn and Dana Stewart and two siblings.

The original article may be viewed on The Antelope Valley Times website.

You may also view the article about the Ian Stewart Memorial Fundraiser that occurred on The Antelope Valley Times website.