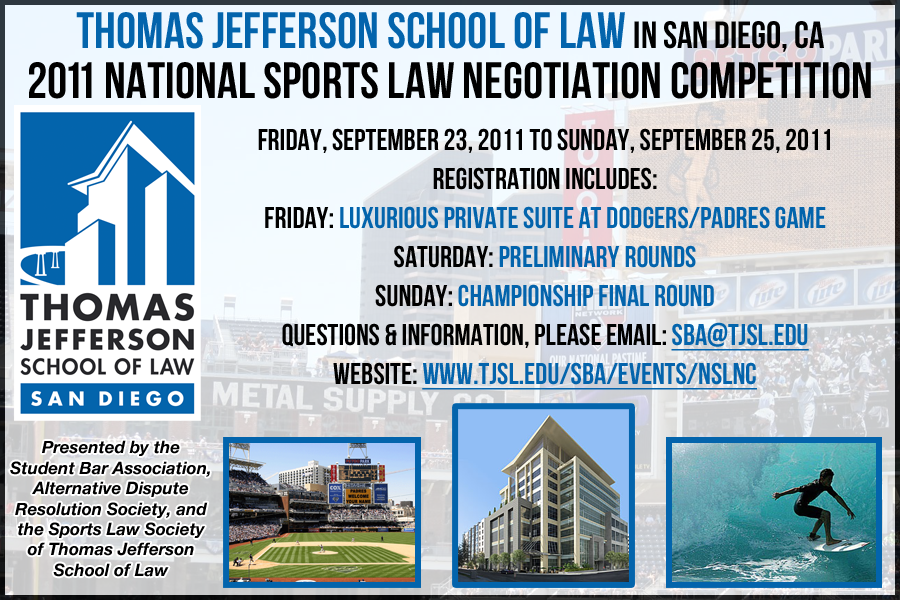 “Success happens when opportunity meets hard work.” This quote was heard by guests who attended the Symposium portion of the Inaugural National Sports Law Negotiation Competition at Thomas Jefferson School of Law held on the September 23-25, 2011 weekend. If the NSLNC and Symposium represent anything, it is the quote referenced above.

Nearly three years ago as I walked through the courtyard of Tulane University in New Orleans, Louisiana, just having heard that we did not make the finals of the National Baseball Arbitration Competition, the thought came to me that we (Thomas Jefferson) could host a competition, give back to the law school by building its name and reputation, and providing a vehicle for student competitors and volunteers alike to learn the ins and outs of negotiations, organizational skills, and building a world class event.

The first step was “the pitch.” In meeting with what would become the NSLNC Board, Sports Law Advisor Randy Grossman ’94, Brandon Leopoldus ’10, and I met to discuss ideas and how we could get the school to support us or at least let us steer the ship to its destination. The thoughts that came to me in the courtyard were put on paper and we initially discussed the proposal with ADR Faculty Advisor Paul Spiegelman, who was eventually added to the NSLNC Board. The pitch was the first of its kind: a national sports law negotiation competition focused on real world facts and athletes, with a sports law symposium, a sports event at Petco Park, a social mixer, and other events to compliment the weekend. As a member and leader of the Student Bar Association from 2008-2011, and with the support of Randy Grossman, we were given the green light.

The next step was “the execution.” We had to plan and execute what was in the proposal. Brandon Leopoldus and I came up with the ideas for the negotiation problems and then drafted the problems. Those problems were then sent to Paul Spiegelman for review and editing. The problems were Round One: Clayton Kershaw of the Los Angeles Dodgers vs. FRS Vitamin Water Co. in an endorsement contract negotiation; Round Two: The City of Los Angeles vs. the National Football League Minnesota Vikings in a move of the team to Los Angeles, California; Final Round: The National Basketball Association teams Boston Celtics vs. the Denver Nuggets in a potential trade of players and cash. The ADR team then sparred with the problems representing each side with general and confidential facts to make sure they worked—they did and the problems were released to the teams.

Then we had to market the competition, build a website, and get the law schools to attend. After several hundred emails, phone calls, and some serious networking and connections, we confirmed and had twenty law school teams from across the country paid and committed to attending the inaugural NSLNC. We had schools from Fordham, to University of Michigan, to UCLA (with four schools on the waiting list for NSLNC 2012). Randy Grossman mainly, others, and I then worked to confirm the judges for the competition, over thirty-five for the entire weekend, which included Superior Court, Court of Appeal, and Federal Judges, the President of the San Diego Padres, and Player Agent/Former Assistant General Manager and MLB All-Star Dave Stewart, Thomas Jefferson Alumni and more. Finally, we connected with the Sports Law Society to plan the Sports Law Symposium to compliment the competition. President Ryan McBride and his board were very helpful. SBA President Marty Stratte was instrumental in the transition and in guiding of the finances and management of the bank and Pay Pal accounts.

The final step was “the deliverance.” We had reserved two Padres Suites for Friday, September 23, 2011, which pitted the Los Angeles Dodgers vs. the San Diego Padres (yes that was planned with the Clayton Kershaw negotiation problem) and the event proved to be a great introduction and success (included food and beverage and a visit and speech from Padres Owner Jeff Moorad). We had raised all of the money we needed for the NSLNC & Symposium by registration fees and additional charges and in the end we borrowed “$0” from the Law School and it was on the backs of student leaders, volunteers, and faculty guidance that this competition became a reality and we delivered the product that we promised nearly three years ago. The Saturday night mixer at the Double Deuce was also a great success and completely free to the NSLNC and all attendees. The Competition and Symposium ran very smoothly and we even held an awards ceremony for all of the law school competitors. The Judges and Competitors had very consistent feedback about the Competition and Symposium: (1) that was the best competition I have ever attended; (2) that was a lot of fun and I would do it again; and (3) this was your inaugural year, could have fooled me! The weekend also included meeting a few superstar players and agents—quite the bonus for a great weekend.

Going forward will be a collective effort of reorganizing, building, adding, and continuing a world class event. Professor Rodney Smith of the new Thomas Jefferson Center for Sports Law & Policy has been voted onto the NSLNC Board and we have already begun planning the NSLNC & Symposium 2012. The NSLNC 2012 will continue to grow and exceed expectations and be the guiding light for other competitions, law schools, and leaders for years to come. In the end, the NSLNC success happened when opportunity (the courtyard idea) met hard work (3+ years and counting). Along the way, there were many difficulties and mountains still to climb, but the journey was worth it and taught me an invaluable lesson about never letting anyone or thing tell you that something cannot be done—well, we just did it! Thank you to all who made this happen.