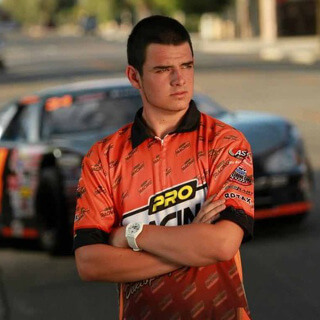 "Since 2013, I have been represented by Jeremy and it has been nothing but good. Jeremy works very hard on anything and everything we decide. Business aside, he has become a great friend! Thank you Jeremy and all you do for me and my career."
Race Liberante, No. 34, Driver

Bio: In racing, some have talent. Some have the name. Race has been blessed with both. Race Liberante is a professional racecar driver from Southern California. He is often seen at blazing speeds around the track in his signature orange and black number 34 racecar.

Race's passion for driving racecars began when he was born where his parents named him after the popular Speed Racer cartoon.

At twenty-years old, Race Liberante is a formidable opponent. In 1999, Race began his driving career at the age of four in the Kid Kart Class. By age seven, Race won his first championship, while advancing into the Cadet Classes at eight-years old, the Junior Classes at age twelve, and the Senior Classes at fourteen. He found continued success with multiple Karting Championships at every level.

Race has dedicated himself to well over 10,000 laps around numerous racetracks across the West Coast. Race is also a racecar fabricator and crew chief, which has allowed him to better understand the characteristics of a racecar.

In 2008, he took ownership of his first race car. Race advanced into The Legend Car Class and eventually into the ASA Trucks in 2009, 2010 and 2011, while continuing to test formula cars and racing karts. In 2011, at Toyota Speedway at Irwindale, he finished third in the Lucas Oil Slick Mist Super Late Model Championship and was unanimously voted as "Rookie of the Year."

In 2012, Race began sharing his passion for the sport by becoming a highly sought after Racing Coach and Driving Instructor. He, however, continues his first passion, where In December 2012, he competed in his first Super Late Model race on a Road Course at Willow Springs International Raceway and qualified in first place, setting a New Track Record for the class and finished second overall.

Race wants to be the first racecar driver ever to win the Indy 500 and Coca-Cola 600 in the same weekend.

Hobbies: Race loves competing in other sports and activities in his spare time. Such as: dirt bike riding, snowboarding, skating, long boarding, surfing, swimming, and working out.